Haunting, thrilling, exceptional, and brilliant – these are just a few words to describe the phenomenal show, The Handmaid’s Tale. A story that will crawl underneath your skin, move into your system and flow through every vein, leaving you gasping for air.
Based on Margaret Atwood’s dystopian novel of a religious takeover of the USA that subjugates women, using them primarily for their fertility – to bear a child for couples who are unable to do so, by forced intercourse with the husband while the wife is present.

Though many moments goes at a very tortuously slow pace, probably to drag it out through several seasons, it’s still beautifully produced. However, it does come a point where you wonder when it’ll all end, will it get solved? Will these women be free?
The first and second season is close to being a masterpiece, though the third one is more of a snooze fest yet you cannot stop yourself from watching, knowing something epic will soon burst through the screen, leaving you mouth-dropping-eyes-wide.

The acting is close to perfection, every single character brings such powerful performance that you’re left in awe, such depth radiating through from the story, visual, and act. 9/10 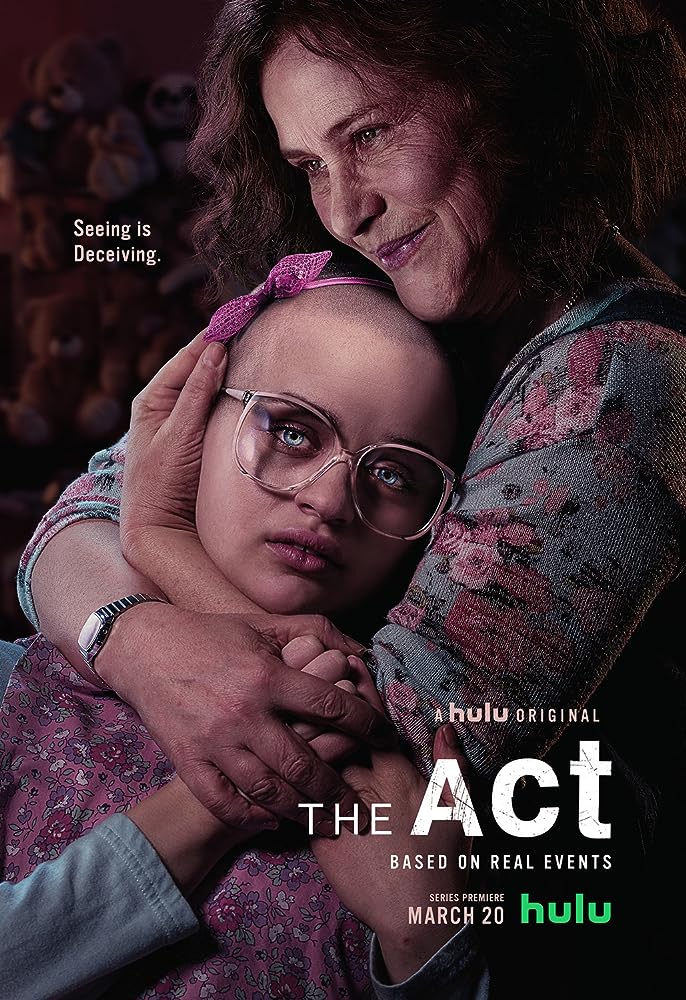 A must see. A tv show based on a true story, a story so twisted, monstrous, and ill that you won’t be able to let it go once its finished, you are going to crave for more, every bit and piece of one of the most horrendous stories in criminal history. It almost becomes an obsession, because you cannot figure out how someone can go to such length to control someone, when loving someone so strongly, reaching unhealthy levels.

The Act is based on the nightmare story about Gypsy Blanchard and her overprotective mother, Dee Dee Blanchard. Following the story for quite some time now, by both documentaries and news articles it is said that Gypsy is guilty of second-degree murder and her boyfriend of first-degree murder because of the killing of her mother, Dee Dee. Killing someone is always wrong, you aren’t the one to decide over someone else life, but watching and following this, I can’t help but stand by Gypsy’s side, completely understanding her and what drove her to such extreme.
Dee Dee had her daughter believe that she needed a feeding-tube, had her teeth removed, that she had Leukemia, MS, an allergy toward sugar, and that she had the mentality of a 7-year-old. Controlling every aspect and angle of Gypsy’s life, watching her every move and counting every breath, she kept her sick in order that Gypsy would always need her and never leave.

The show is brilliantly made, thrilling to watch, and both Patricia Arquette and Joey King are PHENOMENAL. I strongly recommend everyone to watch it and get hooked on the heart-wrenching and soul-shattering story of Gypsy Rose Blanchard. 10/10