What a bloody cry fest! I mean, the bursting out in tears at the end, I was bawling my eyes out, no clue why I have become so sensitive these past weeks, or I am just suddenly paying more attention to the writing, the story, and truly connecting to it, either that or I am slowly becoming the puss of all puss!

Onward deliveries that warm fuzzy feeling from beginning to end, it was emotional on so many levels because it is relatable to so many, that is what made the movie so beautiful because it pulls the strings of your heart and touches your soul.
It is an adventurous animation with wonderful colors that’ll burst through the screen, moments that’ll make you smile, and appreciate so many great things that sometimes, one takes for granted.

Two elven brothers receive a gift from their mother once they both are over 16 – a magical item that can bring their father back for one day, and they embark on a roller coaster of a journey to make it happen.

It’s cute, and to some it will sadly hit a little too close to home toward the ending, and my heart was a raisin throughout, just by the thought.
With its great and detailed graphic, some laughs and a lot of crying, it is a moving film for the whole family to enjoy. 7/10 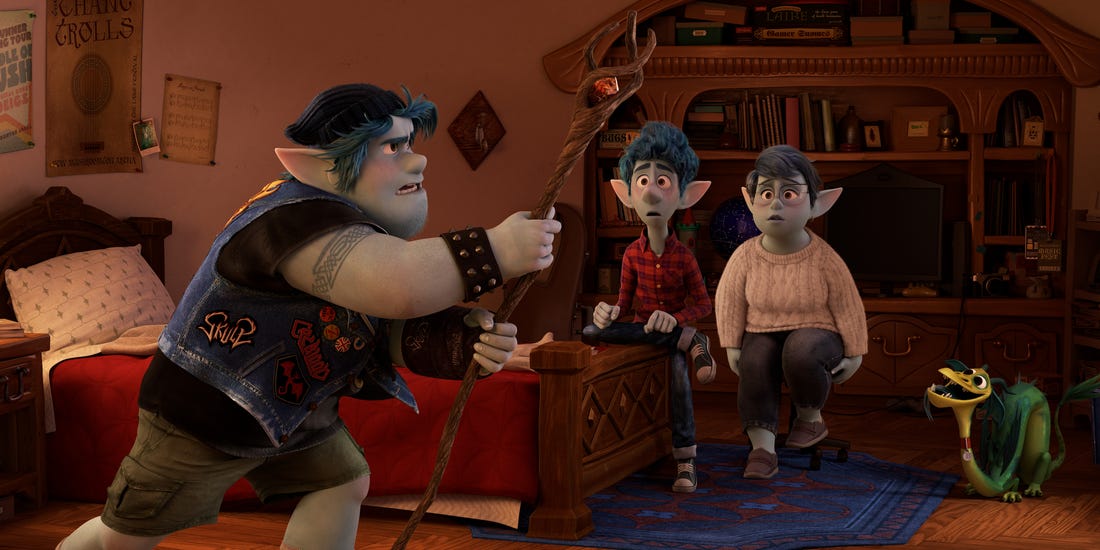 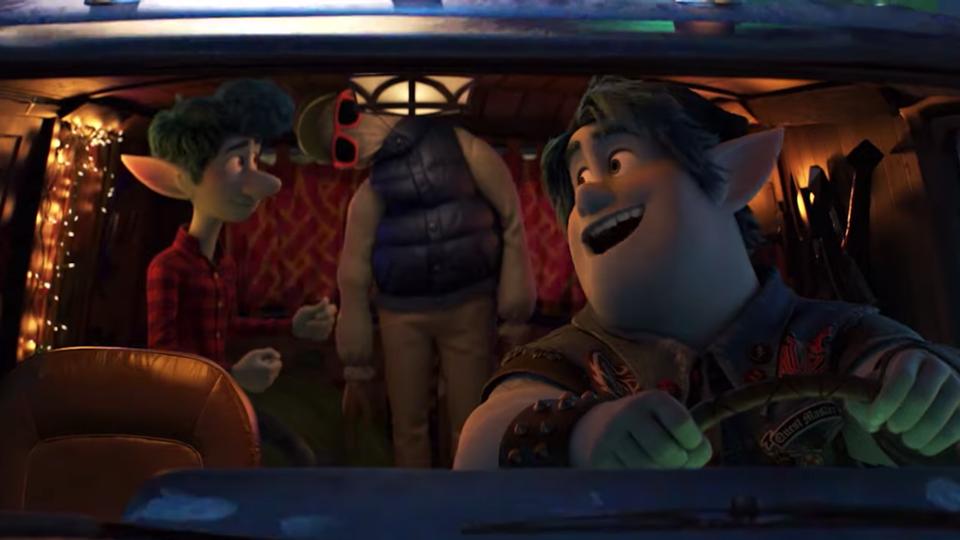 So I finally gave in to the social media hype that is Locke & Key.
After reading a few reviews online before actually sitting down to watch it, I got mixed and confounded feeling toward it, knowing that the only way to figure out if it was good or bad, was to watch it myself.

I now get the cocktail shake of reviews.
Some said it was brilliant, and som complained about the execution of the script, the lack of energy on the writers, and so on.
Sure the writing needed some polishing, and I do agree that some moments were frustrating, creating this massive madness and urge to rewrite it and some characters were simply annoyingly dumb.
However, that tends to be enough for me to absolutely dislike a show or movie, here I still managed to enjoy it.
I still found myself (even my fiance) hooked and grabbed by the storyline, though slightly lazy and dull at times, it never becomes unwatchable, and some people need to have a little more patience since it is based on a novel.
Adaptions hardly – if ever lives up to the actual book due to so many factors that one has to keep in mind before being such a hard judge.
That aside, it was a great, entertaining, and highly cozy tv show to watch.

Locke and Key lapses in logic, there is no common sense most of the time, they made certain characters ridiculously incapable of using their own brain, making one dumb decision after the other.
But what does holds the show throughout the episodes is the graphic and visual, stunning. In all its bad there is a slight essence of intrigue and thrill, and darkness that makes the viewer interested, I would replace the writers and add more depth to not only the storyline but also to the cast, but it has great potential.

The Locke family moves to the fathers’ childhood home after his death in an attempt to get closer to him and his past.
Little do they know that the house not only holds secrets and dark memories, but also magical keys that only if you are special enough – you’ll find but that could also be connected to the mysterious sudden murder of their father.

I doubt my review made it easier, you are just going to have to watch it for yourself and decide, I liked it, and I am somewhat excited to see what they’ll bring to the second season. 5.5/10

A snoozing fest at its finest, a brilliant way to put people to sleep without any pharmaceutical.
To quote Janice, ”Oh. My. God.”
It was pure and utter torture to sit through this film that so many had the audacity to claim to be a masterpiece. Watching paint dry, would’ve been Disneyland compared to these 117 minutes that NEVER seemed to pass. It must’ve been the dullest, slowest, and most boring movie I have ever seen, literally.

I have never experienced such slow paced manuscript, from beginning to end it never, not even for the slightest of second speed or becomes in any way thrilling, and God forbid there was any sort of action, something to intrigue and wake you up from the coma.
I legit thought I had aged a hundred years once the credits started rolling.

A Blade Runner played by a very handsome Harrison Ford (keep in mind that this film was released in 82), must find four replicants who stole a ship and have now returned to Earth.

Sure, it sounds slightly interesting, and in that era, it must’ve been a quite fresh and unique idea for a film, but the pace people, it was a slow dying death at its best.
Blade Runner is a sleeping pill that takes you on a journey of boredom and nothing else! 2/10
And that 2 is for the sole performance and visual.

This was shown at the movie marathon by Film Sensation (Universal and SONY) and the rating and review have nothing to do with the actual event.
The people could not have been any more delightful, and I am extremely thankful for the invite and will continue going whenever invited.
Also, kudos to Hemma-Kväll for delivering snacks and beverage for the two films, it was highly appreciated by myself and my +1. So huge thank you to everyone who prepared and was involved.

Andy Muschietti has truly outdone himself in this remarkable remake, the horror classic from the 90’s based on one of Stephen King’s novels, It. A film for this, and future generations to enjoy and be a part of.

The movie is an extraordinary tribute to not only the original, but also to the writer behind the story as well. The eye for every detail in every moment does not go unnoticed, from the vision, sound, to script – from beginning to end, it’s simply flawless.
You’ll have the creeps crawling through every nerve of yours just by seeing the credits, the melodic yet unpleasant soundtrack of children softly singing, the gray and rainy day, to the performance of every single actor involved.

I wouldn’t call it a hardcore-hands-down horror film, but the thrill and suspense is there, and it wasn’t so much ”jump-in-your-face” type of scenes, but tension, shadows, and sound building up and the atmosphere that delivered that great scary touch to it, along side with the amazing work from the makeup and costume department when it came to Pennywise (the clown), and the other ”monster” like characters.

The actors, who were mostly children, were brilliant, truly phenomenal in every aspect of their act.
One that is already such a talent, is Finn Wolfhard. You might recognize him from the amazing hit tv-show Stranger Things that is streaming on Netflix. Oh Lord, what a joy it is to observe and listen to him, I don’t care how young he is, I literally want to be friends with him, he’s definitely the coolest kid on the block!

Another one that blew me away, (well they all did), but especially, was Jack Dylan Grazer. I don’t know if it was his role, the outfit, but he literally reminded me of Steve Carell in a mini version. He was fantastic. They were all amazing, probably more talented than most grown up actors to be honest.
Superb job from the entire cast and crew. It was a perfect cocktail of drama, horror elements with a dash of comedy thanks to the epic comebacks the kids had for each other. 9/10 And applause to our Swedish actor for giving such classic character justice with his supreme act.

I cannot find the correct words to express my gratitude toward Norstedts, a publisher located in the beautiful Stockholm for this amazing opportunity.
Thank you doesn’t feel enough, but I am thankful for the Swedish translated copy of Grey. I cannot wait to dive right into it once again and to let my inner goddess bask in the thrilling world of Mr.Grey one more time because the first was simply not enough.

As you all can tell, I already owned the original version which is in English but I simply love comparing the storytelling, translation, vocabulary, and flow from one language to another. The review will be up once I’m done.

Note: the handcuffs, body lotion, and tea, is in no way associated with Norstedts, it was simply accessory for the picture.

GREY by Erica L James – 2016
Copy for review from Norstedts

Finally one hell of a ride of an slow paced yet interesting thriller. It’s intriguing and tense, a script that will confuse you and keep you wondering while trying to put every clue together and solve the mystery yourself, unfortunately you’ll fail completely because it won’t be what you’ll expect and THAT is the greatest part of the film, it’s unpredictable! It’s entertaining and has an amazing and talanted cast doing a wonderful job.

Mark Strong plays John, a man with the gift and ability to enter people’s memories. After the death of his wife his own memories taunts him causing difficulties when working on someone else’s thoughts that he has to stop working, that is until he runs out of money and needs a job. He meets the brilliant Anna (Taissa Farmiga) a girl who refuses to eat and his one and only task is to get the girl to eat, but when looking for the cause of her behaviour he enters her mind and has to figure out if she is a sociopath or a victim of trauma? Although, who’s entering who’s mind? 6/6